Skip to content
Panama Canal Container Ship Transits Down in May 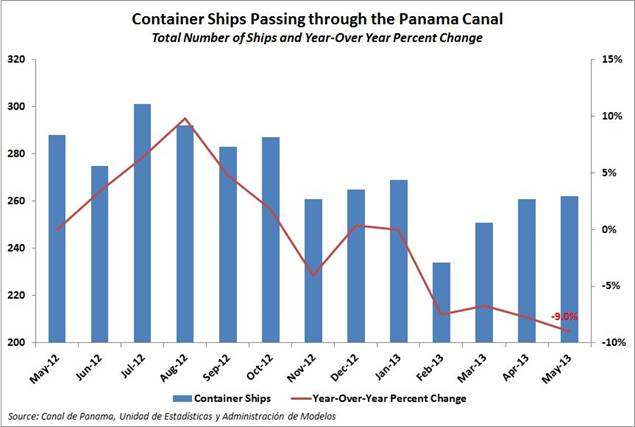 In May, 262 container ships passed through the Panama Canal, 26 less than during the same month in 2012, according to data from Canal de Panama, Unidad de Estadísticas y Administración de Modelos.

However, month-to-month container ship transits have increased for the past three months, inching up 0.4 percent in May from April. In the first five months of 2013, 1,277 container ships passed through the Panama Canal, a decline of 6.2 percent from the same period in 2012.

The total number of all ships — including general cargo, reefer, dry bulk, crude and chemical tankers, liquid gas carriers, container, ro-ro, and passenger ships — passing through the canal in May fell 4.4 percent to 988 ships from 1,034 a year ago. Ship volume has not increased year-over-year since September 2012. However, the number of ship transits did edge up 0.3 percent from 985 in April. Year-to-date through May, 5,029 ships have sailed through the canal, down 7.2 percent from the time period in 2012.