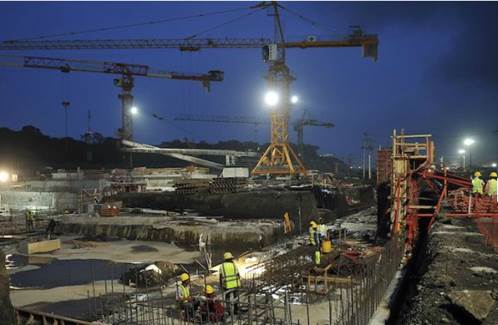 When the Panama Canal finally does open its new locks to commercial traffic, it will be able to handle most, but not all, of the world’s container ships.

By comparison, the existing locks, which are 1,000 feet long, 100 feet wide and 42 feet deep, can handle ships up to 965 feet in length, which limits transits by ships to the current Panamax size of around 4,800 TEUs.

But by the time the new locks open in 2016, shipping lines will have taken delivery of new ships of all kinds that are even bigger than the new locks’ dimensions.

Container carriers will have received more ships now on order ranging from 14,000 TEUs up to 18,800 TEUs, and may have started ordering even larger ships to gain the economies of scale they are so desperately seeking as a way of lowering slot and fuel costs. Shipping analysts think orders of ships up to 24,000 TEUs are possible in the near future.

That’s why the Panama Canal Authority is already studying the possibility of building even larger locks than the set now under construction and has chosen a place for them. “We will only build a bigger fourth set of locks if the demand is there,” Panama Canal Administrator Jorge Quijano said in an interview with the JOC.

He said that 98 percent of the global container fleet will be able to transit the new locks by 2018. “At this point in time it is not financially feasible, but we do have a conceptual design and location that could accommodate an E-class, for example,” he said, referring to Maersk Line’s 18,000-TEU Triple E ships, which are being deployed on the trade from Asia to Europe as they are delivered. “That’s only going to happen when we see a need there.”

GUPC, or Grupo Unidos por el Canal, stopped work on the locks for two weeks in January, and only resumed work after agreeing to submit the dispute to an independent arbitration panel in Miami.

Even after GUPC resumed work, the project was shut down again by a nationwide strike by Panama’s construction workers union.

Quijano said GUPC had to agree to an 11 percent increase in wages, for which it has placed another claim of $23 million for repayment by the canal authority. “We will sit down with them and see what the real number is and decide on how we are going to handle it,” he said.

Quijano does not think the latest strike will result in a further postponement of the locks’ opening date. He quoted Manuel Manrique, CEO of Sacyr, the Spanish engineering firm leading GUPC, as saying the group is committed to finishing the locks by the end of 2015. The overall canal expansion project was 76.3 percent complete at the end of May.

As a result of another arbitration decision, the canal authority will pay $41 million to cover the cost overruns incurred by the consortium of companies that is building the 3.8-mile Pacific Access Channel, known as PAC4. The companies in this group include FCC of Spain, ICA of Mexico, and MECO of Costa Rica.

Despite the possibility the authority may have to reimburse these two contractors for some cost overruns, Quijano is sticking with the original project cost estimate of $5.25 billion. “We have $100-$200 million built into that amount for contingencies, but if we have a finding by the arbitration panel that goes beyond that amount of contingency, that would of course pierce the cap,” he said.

New cargo in the mix

The Panama Canal is financing the project through tolls, which will likely go up in the future, but Quijano said that even with future toll increases the cost of shipping Asian cargo to the U.S. East Coast will continue to be cheaper than intermodal transportation from West Coast ports or than the Suez Canal route that has been gaining cargo from the Panama route in the last two years.

“We have an all-water route that is less expensive than the landbridge and, with the price of oil going up, we become even more favorable,” he said. In addition, the canal is seeing a sharp increase in westbound bulk shipments of U.S. grain exports to Asia, which are partially offsetting the loss of container business to the Suez Canal.

“We will always have competitive prices, and we know that once we open the new locks we will have economies of scale will enhance our competitive advantage. We will draw back most, if not all, the cargo we have lost to Suez.”

Quijano expects another U.S. export to Asia to boost canal revenues in future. “Shale gas promises to be a business changer for us,” he said. “Almost every week we have somebody coming through here saying they have big new LNG ships on order that will be ready to come through the canal in March 2016. Everybody is pushing to have their big new LNG ships ready in 2016.”

In the future, the canal may become less dependent on tolls for its revenues. It wants to develop a new container terminal at Corozal and a roll-on, roll-off terminal on the west bank, both near the Pacific entrance. The canal would develop the new container terminal in conjunction with a private developer and put the ro-ro port out for bids.

“We are gung-ho on this project because there’s high demand for another good port on the Pacific around Panama City,” Quijano said.

The authority is looking at how to finance the dredging and the new container berth that would be its share of the equity in the container terminal project. The private operator would build and operate the terminal and pay a fixed fee and a variable fee depending on the number of containers it handles.

Quijano hopes to get a decision on the project in the next couple of months. “We want to get in on the transshipment business because I think there are good revenues that can be made for ourselves and for partners who would have the experience to manage construction and the facility,” he said.

The canal authority also plans to develop a new logistics park on a former U.S. Army artillery range of more than 2,000 acres in the Canal Zone that has been completely cleaned of its unexploded ordnance and filled with excavated materials from the new locks.

It plans to put the land out for bids to build facilities by 2015 where import cargo could be processed and assembled for export, generating new jobs and adding value. The canal authority is working with local groups to develop training programs that will produce the additional 50,000 skilled workers that the canal and private employers will need over the next five years to staff the new terminals and logistics facilities.

“We see the canal trying to rely less on toll increases and more on other business to support bringing more benefit to Panama as a whole,” Quijano said. “We are focused on being a little more than being just a canal. In the next year or two this should be a different place.”